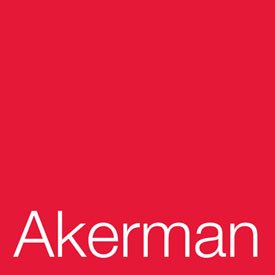 Top 100 U.S. law firm Akerman LLP is pleased to announce that it has expanded its Litigation Practice Group with former Supervisory Assistant Federal Public Defender Sowmya Bharathi as a partner in Fort Lauderdale. Bharathi brings first-chair trial experience to a team of more than 350 litigators nationally, with a focus on civil litigation and general commercial litigation.

âSowmya is a talented, experienced trial lawyer who has handled highly complex cases,â said Litigation Practice Group Chair Lawrence Rochefort. âHer track record of success and lengthy commitment to public service is an indication of her integrity, character and exceptional judgment. She will bring extraordinary value to our clients and our national litigation team.

Sowmya Bharathi is a first-chair trial attorney with extensive and broad federal court experience. Before joining Akerman, Bharathi handled complex trial matters as a supervisor at the Federal Public Defenderâs Office in the Southern District of Florida. There, she tried 24 federal cases to jury verdict, many of which involved cutting edge matters of statutory interpretation and constitutional issues, as well as myriad experts. Bharathi tried an intricate multi-week bank and wire fraud case, defending a former pharmaceutical CEO against allegations by the FDIC and shareholders of a fraud exceeding $140 million. She served as second chair on three potential death penalty cases, conducting nuanced and far-ranging investigations and presenting to the Attorney Generalâs Capital Section â work that contributed to obtaining agreed settlements in high-profile and emotionally-charged cases. She has more recently tried and litigated matters involving media disclosures and the First Amendment.

Through strategic planning and aggressive pretrial litigation, Bharathi has won several court-ordered dismissals of charges mid-trial, as well as government dismissals of six indicted cases pretrial. Dismissed matters included a national security case and a case that tied practical discovery issues into a novel Second Amendment argument. Bharathi has also written over 20 federal appeals, including an en banc matter, and has argued before the Eleventh Circuit Court of Appeals. She has secured wins in the Eleventh Circuit, including a case that she litigated starting from a bench trial through authoring the appellate briefing that triggered a reversal on the papers.

Bharathiâs range of experiences assisted her in securing clemency for individuals during both President Obamaâs and President Trumpâs terms.

Sowmya previously worked at a mid-sized AmLaw firm in Chicago, where she defended corporate clients against contractual disputes, employment discrimination claims, wrongful death cases, and overtime and wage disputes. Having established her reputation as a seasoned trial attorney, Sowmya is routinely called upon by the courts and national programs to speak and train on trial presentation and other federal court issues. Since 2018, she has served as a faculty member of a national training program focused on teaching lawyers across the country how to handle large scale electronic discovery cases.